This post presents RiccoVPN, an interesting concept and a different approach to VPN. It is implementing an encrypted P2P network instead of relying on a VPN gateway. Keep reading for more details.

Before talking about RiccoVPN let’s see the options you have when it comes to anonymizing and securing your Internet connection. Depending on what you want to achieve, you can go for one solution or another. But let’s first summarize the options:

Except for Tor, most of those solutions expect you to connect you to one gateway; then this gateway will “mask” your connection before forwarding your request to any internet server that you want to see.

As I browsed the internet, I stumbled on one concept that seemed interesting (at least at first approach), it is called RiccoVPN, and it is published by PrivacyProtector.

So I checked on their website and found out that they provide a privacy solution that requires you to install their proprietary client. What popped to my eyes is that it comes with a FREE solution that is called RiccoVPN FREE. While it is expected to be a “bait” so that a potential user jumps into the paid version, the features can be of use for standard things like connecting from a public Wi-Fi, from hotels or Airport. The caveat is that the bandwidth is limited to 512 kbps and you can’t pretend to be somewhere else: though the free version isn’t a solution for bypassing geolocation-limited services.

As one would expect, most of the argument is stated in a way that you are pushed to opt for the RiccoVPN Plus solution instead of staying with the free solution. So I checked the Plus option and found out that RiccoVPN is implementing an encrypted P2P network instead of relying on a VPN gateway. 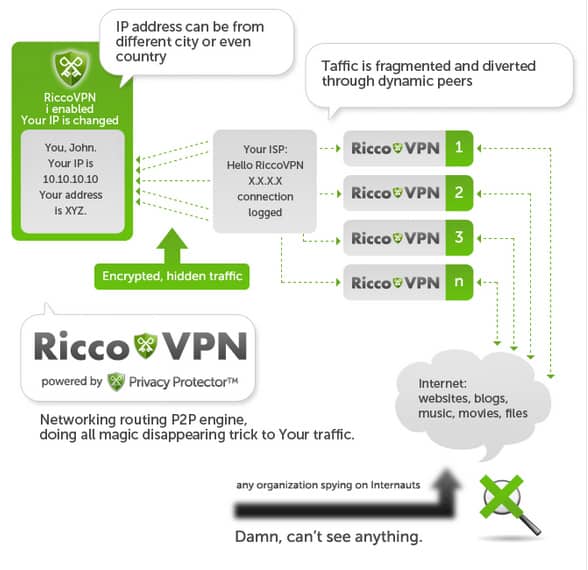 The idea is innovative, but yet has to prove how effective it is. By leveraging on P2P network, internet connections are harder to track indeed (there’s no VPN gateway in the scheme). But since every user in the network is expected to run the RiccoVPN client, I would suspect that if I run the RiccoVPN client on my computer, then it would mean that my computer would also be used for encrypting other people’s traffic.

While this article isn’t a recommendation, I think there’s some potential in that no-gateway concept. With SOPA-like bills, there’s a tendency to find some technical solutions that won’t allow you to be tracked from your ISP or VPN provider. From the “commercial ad,” RiccoVPN claims that “we do not need to know you.”

What do you think of that approach? Do you think it is something that you would try?

Previous article 7 Excellent HideMyAss alternatives [Updated 2020]
Next article How to Run a VPN from a Kindle Fire?

How to browse with Thailand IP address