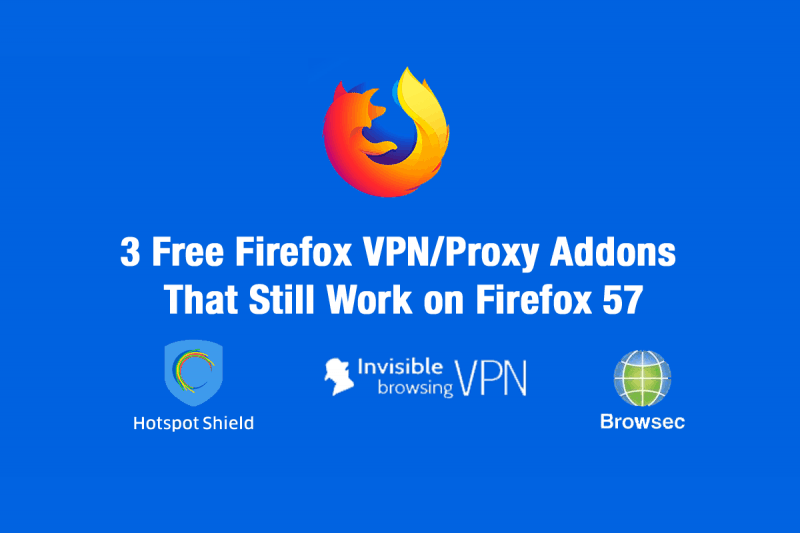 You probably heard about Firefox 57, the complete rebuilt version of the popular browser. Some of the existing VPN and proxy add-ons are no longer available. This post lists 3 (I wish I could find more) free Firefox VPN/proxy addons that still work on Firefox 57 (and newer versions).

How is Firefox 57 different?

Firefox 57 (aka Quantum) was launched on the 14th of November 2017, and it was presented to be twice faster and more memory efficient. It represents the result of years of development from the Mozilla team that tried to fix most of Firefox’s previous problems, such as speed and frequent crashes.

Unfortunately,  the new Firefox architecture comes with a price. The WebExtensions API that is now the backbone for all Firefox addons is not backward compatible. Thus, some of the older addons for Firefox no longer work on Firefox 57.

What is a Firefox VPN addon?

A VPN (Virtual Private Network) or a proxy is a solution that changes your public/visible IP address while browsing the Internet. Thus, your browsing data is secured, you are protected against some types of cyberattacks, you are able to safely access the Internet, and you can access blocked websites.

As we explained in another post, the term VPN is not accurate for browser add-ons or extensions. But, as it is largely used I will continue calling them Mozilla Firefox VPN/Proxy add-ons.

During the last days, I have tested several Firefox VPN/proxy add-ons to identify those that are compatible with Firefox 57. Unfortunately, I was only able to identify three such add-ons that are free or at least expose an open mode, without signup. Read my findings below.

Hotspot Shield Firefox VPN addon is precisely the same as the Chrome extension, and it works like a charm on Firefox 57. It comes with unlimited bandwidth, a lot of extra, security and privacy-related options, like ad-blocker, tracker blocker, and cookies blocker. The default server selection is “Optimal,” but you may switch to manual and pick one of the following countries: Canada, Chile, Sweden, Netherlands, Spain, Czech Republic, Turkey, Russia, India, Germany, and Singapore. Click to connect in seconds.

ibVPN Firefox VPN extension is a pleasant surprise. I use their Windows app on a regular basis and I find it extraordinary useful, even though the user interface is not as lovely as it could be. The so-called Guest Mode of the add-on allows you to enter without signup and connect to servers located in the United States, Netherlands, Germany, and Singapore.

Similarly to the ibVPN addon, Browsec has a free mode and a premium model. The free mode offers access to four locations: Netherlands, Singapore, the United States, and the United Kingdom. The interface is nice and friendly!

Which free Firefox VPN addon should you use?

It depends on what you need.

Are you not happy with the free browser extensions? You may go to their premium plans or choose others like Private Internet Access or ZenMate. They all offer primarily the same functionality. However, the locations may differ and also the connection speed.

What exactly browse anonymously means? The term refers to the fact that visited sites cannot identify you using your IP address or by using other tracking methods (like cookies).

Thus, here is what you need to do for anonymously browsing:

What do you think?

What do you think of Firefox 57? Do you use free Firefox VPN addons? Which one is your favorite? Are they still available for Firefox 57? Let us know your thoughts in the comments below.

Previous article How to Setup Your Raspberry PI VPN Connection

Next article 5 best Kodi streaming addons that are completely legal

Pros and cons of using VPNs for hiding your IP address