You have surely heard about this SOPA thing on the news lately. SOPA stands for “Stop Online Piracy Act”, and it’s an effort made in the US for fighting against piracy on the internet. You can guess that Hollywood big guys are actively supporting this act. 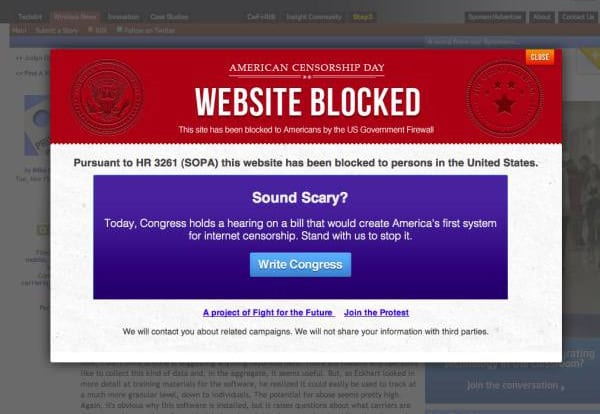 Because it gives again, more power to “Hollywood & Entertainment” industry, it may lead to unauthorized censorship and may influence (in a bad way) internet in the whole world we think it should be opposed. Introducing more and more restrictions over the internet, its users and providers will not stop piracy but it will stop freedom and evolution of the web. As it is it may also lead to complete lack of privacy and anonymity. As above mentioned Android Authority we will use Wikipedia to tell you first what SOPA is:

“The Stop Online Piracy Act (SOPA), also known as H.R.3261, is a bill that was introduced in the United States House of Representatives on October 26, 2011, by Representative Lamar Smith (R-TX) and a bipartisan group of 12 initial co-sponsors. The bill expands the ability of U.S. law enforcement and copyright holders to fight online trafficking in copyrighted intellectual property and counterfeit goods.”

SOPA – Know the supporters of both sides

On the business side of things, news is reporting some very popular radical stand vis-à-vis the SOPA: for example, Godaddy initially publicly supported SOPA, but then, once the community started targeting them, and especially when a high number of their current customers have decided to move away from Godaddy’s services, they decided to publicly claim that they are against SOPA. We aren’t going into the details about knowing if that decision was taken for commercial reasons instead of conviction.

On another side, Reddit, the popular user-curated news site has decided to blackout his services on January 18th to show their protest against SOPA. This is a courageous move, and while people are expecting a similar move from big internet companies, it is expected that there will be more mobilization for the coming weeks to put the pressure on. The site Americancensorship.org maintains a list of people and organizations that are actively involved in combatting SOPA.

People supporting the SOPA are also active. Since we have issued a list of people against SOPA, here is the counterpart: those who are supporting the SOPA bill. Just for the note, interestingly, as I searched the internet, I didn’t find a lot of “news” showcasing people/organizations supporting SOPA.

I know, I may not have used the proper search terms, but anyway, it makes me think that since we’re on the internet, and that SOPA deals with internet censorship, could it be that the internet has “censored” SOPA supporting news? I know, this sounds like a conspiracy theory, but I’m sure there’s a lot of convincing/support for SOPA in the offline world that aren’t reported on the internet. If you find some of them, I’d love your comments about it in this article.

This act has generated a lot of outcry from internet users. We can even cite that some big companies (Godaddy for example) are now suffering from publicly supporting this SOPA act. More and more people have decided to transfer their web and domain hosting accounts to other providers mainly because Godaddy has initially backed up the SOPA act.

Despite the fact that GoDaddy stepped back and reviewed its position, it is clear that users have already made up their mind and that the damage has already been done the minute they have publicly shown their support to the SOPA act.

Anyway, it is expected that more companies are facing the same issues.

But what is SOPA anyway?

Simply said, it’s an attempt by the US to control over offshore “rogue websites” that “steal America’s innovative and creative products attract more than 53 billion visits a year and threaten more than 19 million American jobs.”. While the goal is noble – it’s hard to accept that other people are only leeching from your hard work- the fact of the matter is: a lot of internet users do not accept the way it is handled.

Interestingly, major internet big companies have shown their disagreement against SOPA. A long list of companies is available on the internet, but we can cite the letter that Google, Facebook, Twitter, Zynga, eBay, Mozilla, Yahoo, AOL, and LinkedIn wrote to the U.S. Senate and House of Representatives. That letter is claiming that SOPA poses “a serious risk to our industry’s continued track record of innovation and job creation, as well as to our nation’s cyber-security.“. Some companies, like Yahoo, even went further by leaving the US Chamber of Commerce since it supports the SOPA (Stop Online Piracy Act).

As we can see, there’s a lot at stake here.

If it is passed you might wake-up to quite new reality where your ISP constantly monitors what you do on the internet, where not only download but streaming copyrighted material will be a felony.

It may also prevent new start-ups from succeeding if they will be marked by the entertainment industry as illegal (as once YouTube was!). If you are an American or if you have friends in the USA let them know what is happening – remember that what today is in the USA tomorrow might be a law in your own country as the reach of “Hollywood” can go really far.

How would that affect offshore websites?

I’m not going to go into details into the legal matters (this definitely isn’t my cup of tea). But if I want to be pragmatic, this means that if that rogue website is on a co-hosting web server where my own website is (which happens a lot in the web hosting industry). Then there’s a high risk that my simple and clean website would also be brought down since my co-tenant would have been sued as a rogue website. My website would only count as another collateral damage that none of those big guys would even care about.

When VPN and proxies won’t protect you from SOPA

At this stage, there may be some hot discussions about privacy and all those long political/legal debates so as to identify if the VPN provider would provide the information or not. Should the SOPA become enacted, then there’s a legal argument that the VPN provider can’t deny, so he’ll be obliged to reveal the IP address corresponding to that specific connection.

Aren’t VPN providers supposed not to log those kinds of things?

Well, let’s just consider that if it isn’t clearly written on the contract that they don’t log your IP address, or anything private, then just assume they’re doing it – so I strongly advise you re-read your contract with the VPN or Proxy provider. From here, they have your actual IP address. Guess what, the SOPA enables the attorney to ask the ISP to reveal who used that IP at that time – guess what: the ISP would have to give the information he has about you on their files (or at least the data that are associated to the internet contract).

Anyway, this SOPA case isn’t over yet. It surely is a good scenario for another Hollywood movie that would be titled “Hollywood vs internet: battle of the Titans”. What’s your view on this SOPA (Stop Online Piracy Act) case?

Previous article “We Respect Your Privacy” E-mail Newsletters
Next article Do You Know What Packet Sniffing Is? If Not, Then You Should.

Pay For Your VPN Subscription With Liberty Reserve

Freedur Fight – Who Is The Real Owner?