This is part of the series of reviews on the current solutions that can help our readers to protect their privacy online. This article will discuss HideMyAss’offer and present the HideMyAss review.

As of the time of writing, HideMyAss is available for the following platforms:

Although most serious VPN now implement OpenVPN (and HideMyAss also does), it’s always good to check the list of PPTP servers provided. This comes handy when you are considering using the VPN service with mobile devices (iPhone, Android, iPad, …) as those devices usually come with a PPTP client.

Not only HideMyAss provides a huge list of PPTP servers, but they also have detailed documentation for implementing it on Windows (XP, 7), Apple and Android.

Once the HideMyAss VPN client is launched, the country selection is definitely a great feature. You can just select on a Google map which country you want to go to. For people who don’t really want to worry about learning geography, this is definitely useful: especially for choosing a city in the US – which is a definite advantage in my opinion. 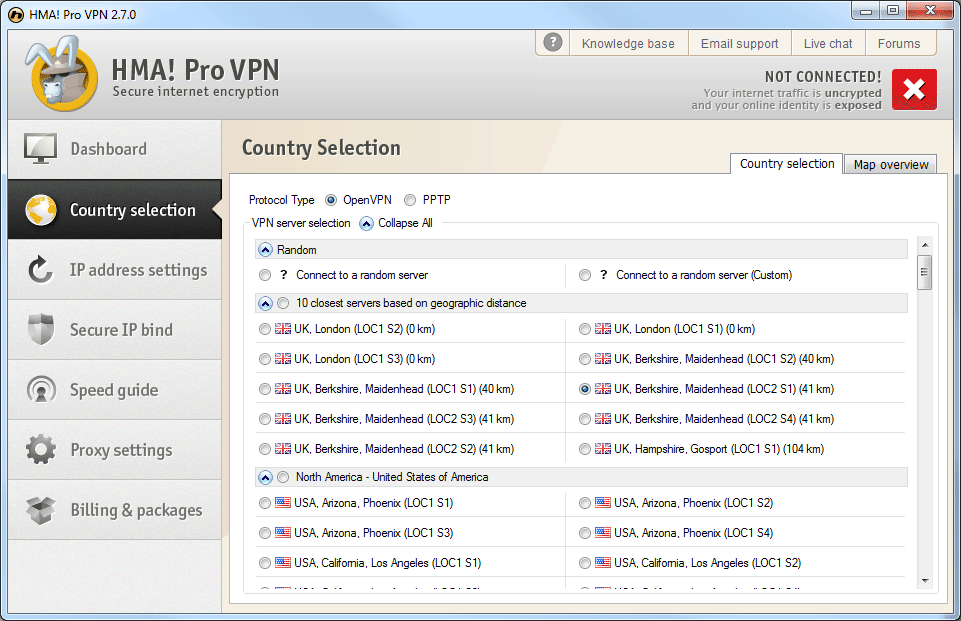 The secure IP bind feature: I love it. More often than not, my issue is that I launched my VPN connection, then forget to check that sometimes it disconnected while still browsing. With Secure IP binding enabled, I can specify applications that should only work once the VPN connection is set up. No need to worry if my VPN connection went down or not.

Random change of IP on a regular basis: while this isn’t a must for me, I guess some people would love being able to change their IP, let’s say every 30 minutes. A small disconnection will happen so as to be able to change the IP, but I think it’s worth it.

Things they could improve

For Mac, the user is invited to download and install Tun Tap driver from Sourceforge. I think it would help if HideMyAss provided an installation bundle so that simple users wouldn’t have to figure out the correct Tun Tap format to download.

The link to Sourceforge that is used on HideMyAss redirects to a .tar.gz file to download: I’m pretty sure most users won’t even know how to handle a .tar.gz on a Mac. They provided an installation .exe file for the Windows version, why can’t they do the same for Mac?

In fact, initially, I wanted to try HMA with my Android phone (still a 2.1). After checking the documentation, I found out that I needed to use the PPTP version (which, by the way, has a different credential than the one you’ve been given when buying HMA). After configuring my Android phone, as per the HMA provided documentation, I had hard times connecting, my phone kept on reporting “Attention: Server hung up. The username or password you entered could be incorrect. Do you want to try again?“.

After going back-and-forth between the documentation and my phone, I couldn’t find anything wrong. I even tried to change the PPTP credentials from HMA’s back office with no success. I finally decided to contact HMA support with my issue, and, to my surprise, I received an answer almost 10 minutes after I sent the e-mail that advised me to use L2TP instead of PPTP.

So I reconfigured my Android phone on L2TP by using the PPTP credentials, and heck I could at least connect via VPN. Frankly speaking, I found it hectic to get my Android phone connected with HMA, so I decided to test it on my Windows laptop (If you want me to review it a bit further on my Android phone, feel free to ask it in the comment section).

So as to give a good background on this test, it’s worth mentioning the platform I am using: I am using an updated Windows 7 laptop with the latest and current HideMyAss software (version 2.6.9) that has been installed through their windows installation package (you know me, I’m always using the simplest solution that is provided to me so as to help those who don’t really want to care about the technical stuff).

First thing I noticed, it takes a few seconds before the HideMyAss dashboard gives you the hand for entering your credentials (username and password)- mainly because there seems to be some initialization that is made in the background. Well, it’s not really a big deal, but for the impatient people out there, it may be disturbing.

What I found really interesting with HMA is that it has a LoadBalancing feature that is enabled by default. This means that if you want to connect to a country that has multiple servers, you can specify, for example, that once one server reaches 30% (the default settings), HMA will switch to another server. In my opinion, this can come handy so as to enjoy a great VPN service, provided that the online service you’re reaching do not penalize you for changing your IP services too often.

Anyway, I’ve run HMA, by choosing the OpenVPN protocol (which is my preferred protocol), entered my credentials, then ended up with the following error message 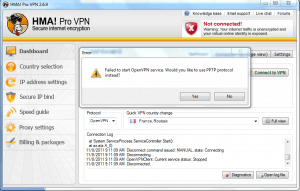 Ok, so I accepted to use PPTP (although a bit skeptical since I already had a PPTP issue with Android), but anyway, I’m here for testing. Unfortunately, the result was the same: I couldn’t establish a VPN connection either.

After reading the documentation, I’ve been advised to run the diagnostic which is located in the “connection log (large view” tab). This is an 11 steps check that creates a very technically detailed report. So I run it, then generated the report, and now I’m off to sending it to HMA support again. Let’s see how it ends up.

HideMyAss free proxy can be used to surf the internet anonymously whilst hiding your IP address. This way you bypass restrictions, blocked websites, hide your browsing history and protect your identity online.

HideMyAss free anonymous email service enables you to create a disposable email address to protect your privacy online. If you need to give someone your email address or need to sign up to a website which requires an email address, but you don’t wish to reveal your identity then this service for receiving emails is what you need.

Stay tuned for the issue of this HideMyAss review 🙂

Previous article What Is Logged Into a VPN Connection?
Next article Once Free VPN HotspotShield Lands on iOS as a Paid Version

How to Configure Firefox 3.5 to Use a Proxy

How to Watch BBC iPlayer Outside of the UK