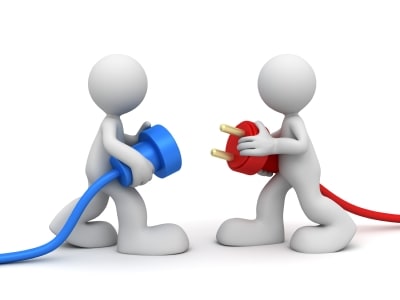 In this post, you will learn how to handle VPN connections outages and find VPN providers that offer apps with the VPN autoconnect feature.

We’ve written a lot on this blog with regard to the usefulness of a VPN connection. To sum up, it helps you “hide” behind another IP address while keeping the connection encrypted. This is specifically useful for accessing geo-location-limited online resources like Hulu,  Spotify or some online TV shows. Indeed, VPN is some “secret” weapon for overcoming those geolocation limitations – and they work pretty well.

However, for those experienced VPN users, they have surely noticed that, from time to time, VPN connections are cut-even though your internet connection isn’t. This can lead to the tricky situation since you may still be surfing some restricted online resources, thinking that you are protected behind a VPN- which isn’t the case anymore.

So let’s see first some reasons why those VPN connections can be cut. In fact, there can be multiple reasons to that, here are the most usual ones:

How to handle VPN disconnects

Now, it would be great if a “program” monitors the VPN connection for you so that it stops your connection and reconnects if your VPN connection is cut. And that’s what the opensource solution VPN Lifeguard do. VPN lifeguard is a Windows program that can help you specify some programs that should only be launched provided that a VPN connection is established. There are few caveats though to VPN lifeguard: it doesn’t support OpenVPN, and it has to be run in administrator mode.

If you are on a Linux system, you may want to try VPN Auto-connect for Linux. I haven’t yet found a similar solution for Mac, but if some of the readers know some, feel free to mention it in the comment section.

VPN disconnects can and will happen to every user. It depends on the VPN service how they are handled. The best case is provided by services that constantly monitor the VPN connection and, in case, it drops the app immediately tries to reconnect to the same server or another one. This is the VPN autoconnect feature.

Previous article Bittorrent Privacy Service From TorGuard.net
Next article Why Using a Free Proxy Can Be a Bad Idea?

What VPN Solution for My Smartphone?

How to browse with an IP address from South Africa

December 5, 2016
There are no comments yet No comments