SSTP VPN or Secure Socket Tunneling Protocol VPN is a form of VPN tunnel that provides a mechanism to transport PPP or L2TP traffic through an SSL 3.0 channel. Learn about SSTP VPN providers.

What is SSTP VPN protocol?

SSTP is Microsoft’s Remote Access Solution (RAS) for PPP over SSL connectivity. It is more secure than PPTP/L2TP and more difficult to be blocked by ISPs. Another advantage is that it works on 443 port, thus providing faster connections than most SSL VPN products such as OpenVPN. You may use it as a Stealth VPN protocol.

How to set up an SSTP connection?

You may set up a Secure Socket Tunneling Protocol VPN connection either manually or by using a VPN client app. The manual setup is similar to PPTP tutorial the only difference being you need to select Secure Socket Tunneling Protocol (SSTP) in the Security tab. A more advanced approach is to use the Software VPN technology to connect to an SSTP server. 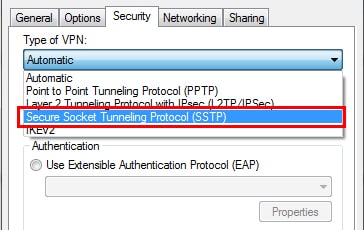 After the initial setup, you may connect to VPN as you usually do with PPTP or L2TP.

When a computer connects to an SSTP server a new IP address is assigned, an IP address that is owned by the provider.  Then all of the Internet traffic is encrypted and is tunneled to the SSTP VPN server.  Once there, it is decrypted and allowed to travel to its intended destination. The ISP only sees a single encrypted data stream between the computer and the SSTP VPN server on the 443 port.

As this protocol was developed by Microsoft, it only works on Windows Vista, Windows 7, Windows 8 and Windows 10. In the future, probably more operating systems will provide SSTP compatibility.

Making use of an SSTP VPN comes with various benefits. Mostly, it is barely discernible and lets you access the World Wide Web via mainstream ISP’s available. Another significant advantage of SSTP in contrast to PPTP and L2TP is that it cannot be easily blocked by firewalls as the traffic is sent over HTTPS on port #443.

An important plus of SSTP is that it provides PFS – Perfect Forward Secrecy – which is an encryption method almost impossible to hack.

VPN connections are blocked and banned in countries like the UAE, China, Syria, Belize, Bahrain, Kuwait, etc. So, what better way to access the web anonymously than to use an SSTP VPN? You can be assured that the SSTP is 100% secure and safe from the inquisitive eyes of the Internet Service Providers. Online security and privacy while surfing the World Wide Web is a common concern for every savvy web end-user, and SSTP based VPN is fast gaining popularity as it provides guaranteed secure connection across the Cyberspace today.

As techie users go for the best SSTP VPN service, you can forget all about phishing scams, spamming, and other cybercrime worries. All of your information online will remain safe and secured as it passes through SSTP based VPN tunnels. Once you are assigned a system-generated IP address, you will start to savor your anonymity online. Websites you will visit will not be able to gather your data or spy any of your activities online. In turn, it saves you from the jeering internet marketing companies who are looking for leads and offering you tons of worthless products online. As long as you have the safeguard of SSTP VPN, you need not worry about your online data being stolen away.

End-users from countries where access to some online sites is made illegal or prohibited by specific laws can now regain their freedom with the help of the best SSTP VPN services. Geographic locations that do not enjoy unrestricted access to the Web can now do so. But thanks to VPN technology, you can now unblock any websites of your choosing.

Relish your new-found freedom, and be able to see things other people do across the world. SSTP VPN is the brand spanking new, safe, and the advanced way for you to access the Internet in specific geographical locations where there are strict censorship rules and regulations that tend to block PPTP or L2TP VPNs.

At this time, few VPN providers offer SSTP clients compared to those that offer PPTP, L2TP, and OpenVPN. Here are some of them:

As many ISP block, regular VPN connections in countries like Oman, Kuwait, Qatar, UAE, Secure Socket Tunneling Protocol VPN is a good solution for unlocking restricted websites. The bad side is that it’s only available on Microsoft Operating Systems, Vista, Windows 7, Windows 8, and Windows 10.

What do you think about Secure Socket Tunneling Protocol VPN? Do you use it? Does it work better than other VPN protocols? Let us know your thoughts in the comments below.

How NOT to Use Hide IP Tools?