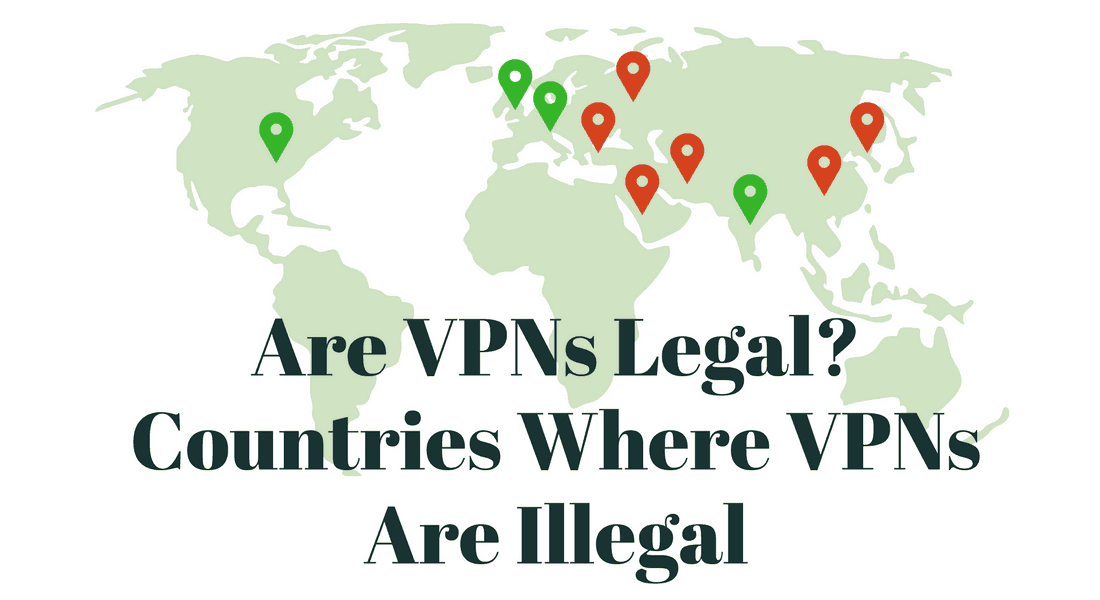 There are many VPN services available nowadays, so it stands to reason that using one has advantages. The questions are, “What are these advantages?” and “Are VPNs legal?”.  Learn if VPN usage is legal in the United States, United Kingdom, European Union, China, Russia, UAE, Turkey, Iran, Iraq, Oman, India, North-Korea. Also, are VPNs legal for torrenting, for unblocking Netflix, and for Kodi?

Before we look at the advantages and legality of VPNs, it will help us to understand how they work and what they do. A virtual private network (VPN) connection does two things:

Well, that is a tricky question. The answer should be “Yes,” but it is more accurate “It depends.”

In most countries, going through a proxy to hide your IP or using a VPN is perfectly legal. You can’t get in any trouble for this unless you are suspected of doing illegal activities while under hidden IP’s.

Advantages of using a VPN

Although a VPN (Virtual Private Network) slows down connection speed by between 25 and 50% percent, there are some excellent reasons why you might want to change/hide your IP address or cloak your activities.

Are VPNs legal or illegal? VPN is legal in most countries!

In general, VPNs are legal in most countries, but how it is being used will ultimately determine its legality in those countries. There are however many countries where the use of VPNs is illegal, irrespective of what it is being used for. In these countries surfing the Internet may be dangerous, as users’ identities may be exposed to the activity monitored by governmental firewalls.

The legality of VPNs is various countries

Are VPNs legal in the United States?

VPNs are entirely legal in the US and are used by numerous organizations.

You need to, however, be careful what you do with your VPN, as some usages are against the law. If you use a VPN to prevent people from determining your IP address or location, this is legal in the US.

If you, however, use a VPN to download movies illegally, you are committing copyright violation which is a crime in the US.

Is VPN legal and safe in the United Kingdom?

Although VPNs (Virtual Private Networks) are legal in the UK, this should not be confused with the legitimate use of VPNs. VPNs could be used for illegal activities, and these typically involve copyright infringements. If you use a VPN to download copyrighted material illegally in the UK, you could face severe penalties.

Are VPN services legal in the European Union?

VPNs are legal in the EU. However, there are some, for instance, Denmark that have introduced laws that enable them to censor internet content. In this case, VPNs could be used to bypass the censorship and users may get into legal trouble.

Is VPN usage legal in China?

VPNs are not legal in China. China continuously tries to close down VPN services by blocking individual providers, but this is not effective as new services keep replacing those the government blocks. With new legislation released by China, VPN service providers need to get approval from the government. This, however, means they have to agree to terms that defeat the purposes of VPNs. Some regions ban VPNs completely.

Are VPNs legal in Russia?

VPNs are illegal in Russia and Putin has signed a new law that increases internet censorship substantially. This is seen as being the beginning of the Russian VPN ban. There is however much confusion about what exactly is banned and how it will be implemented due to media reports not always being accurate.

Are VPN services legal in the UAE?

The United Arab Emirates has recently banned the use of VPNs. Penalties for using a VPN are stiff and range from imprisonment to massive fines of up to £400,000. The law states that:

Whoever uses a fraudulent computer network protocol address (IP address) by using a false address or a third-party address by any other means for the purpose of committing a crime or preventing its discovery, shall be punished by temporary imprisonment and a fine of no less than Dh500,000 [£100,000] and not exceeding Dh2,000,000 [£400,000], or either of these two penalties.

The bill also refers to accessing blocked services or websites, which can only be done with a VPN or proxy. Such blocked services are Snapchat, Viber, and WhatsApp, other VOIP services except for Skype.

However, many Internet users from the UAE (United Arab Emirates) are using VPN apps and services.

Is VPN usage legal in Turkey?

Recep Tayyip Erdogan, the prime minister of the country, has expressed his dislike for social media publicly, and his administration introduced the blocking of various sites. Also, Tor and popular VPN services were blocked by ISPs (Internet Service Providers). The VPN usage is discouraged in Turkey, but not illegal. For Turkish VPN users, it is essential to go for VPN services that provide IP leak and DNS leak protection, in order not to get exposed.

Are VPNs legal in Iraq?

Although VPNs are officially illegal in Iraq, government-owned institutions and government officials casually break their laws and use VPNs daily. Iraq has banned the use of VPNs and blocks chat apps and social media under the pretext of stopping ISIS.

Is VPN legal in Iran?

In Iran, VPNs are illegal unless they have been registered with the Iranian government and they approve them. There is however not much point in using a VPN under these conditions. However, there are remedies to the Iranian block.

Are VPN services legal in Oman?

VPNs are illegal in Oman and are actively blocked as part of widespread media censorship that includes the internet.

Are VPNs legal in India?

VPNs are legal in India despite a recent government warning that internet users could face jail time plus a fine for visiting forbidden websites. A judge however later pointed out that this Internet activity is not illegal.

Are VPNs legal in North Korea?

The legality of VPNs for various usages

Are VPNs legal for torrenting?

Torrents are legal to download whether you use a VPN or not. When copyrighted material is however shared and downloaded, this is illegal. Make sure that you read our 12 tips on how to torrent safely, and that you use one of the VPNs for torrents. Also, you should ask yourself: is a free VPN safe?  In my opinion, you should not trust free VPN services for your torrent downloads.

Is VPN legal and safe with Netflix? Using a VPN for Netflix is against their Terms of Use. When questioning their service department, their official stance is that they don’t encourage the use of VPNs due to potential quality issues, but they don’t frown upon its use either.

Are VPN services legal for Kodi?

Using a VPN for Kodi is legal as long as the use of VPNs is legitimate in your country. There are however Kodi add-ons that may not be legal, and using these can be a crime.

Although VPNs are legal in most parts of the world, care should be taken not to use them for illegal purposes. There are, however, some countries where using a VPN is illegal and breaking these laws could result in stiff penalties.

What VPN Solution for My Smartphone?

How to Manually Setup a PPTP, L2TP or STTP VPN Connection on Windows